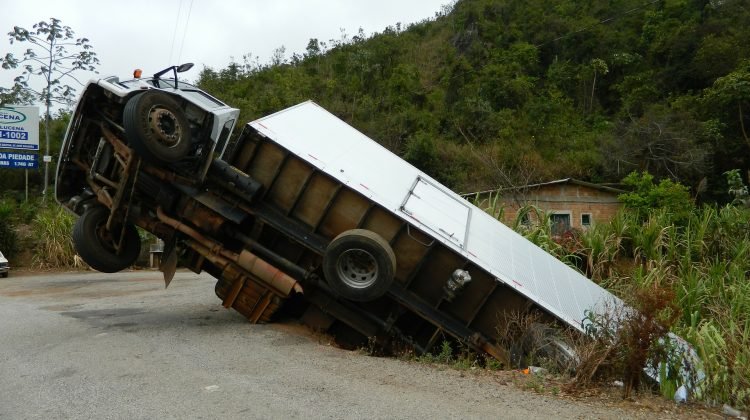 Even after high-profile accidents put truck safety in the national spotlight, the trucking industry has spent millions of dollars lobbying Congress to increase limits on truck size, relax restrictions on driver rest time, and delay rule-making on testing drivers for sleep disorders. Lobbyists and their allies in Congress often use deceptive means to make dangerous bills seem like safety measures.

Illinois State Trooper Douglas Balder was nearly killed in a fiery crash in January 2014, when a sleep-deprived trucker barreled into his squad car on the Ronald Reagan Memorial Tollway. Balder had stopped to assist a big rig bound for Chicago that had stalled. Renato Velazquez was driving another semitrailer while fatigued, and he struck Balder’s vehicle, launching it into a roadside ditch while exploding its gas tank and setting the car on fire. Balder was in a medically-induced coma for six weeks and needed 10 surgeries and extensive rehabilitation to recover. Investigators later found that Velazquez had faked his logbook entries to show that he took required rest stops when in fact he had been working for nearly 37 hours straight.

Truck accidents like the one that changed Balder’s life show why big rig safety regulations need to be strengthened, but the trucking industry is working to weaken them. In July 2013, the Federal Motor Carrier Safety Administration (FMCSA) enacted a regulation reducing the maximum hours truckers could drive from 82 to 70 hours per week. The rule also mandated 34 hours off work and two nights with no driving between 1 a.m. and 5 a.m. Trucking lobbyists began working to weaken this rule nearly as soon as it was enacted, recruiting Maine Senator Susan Collins to lead the effort. Instead of taking the above-board approach of introducing legislation to undo the rule, Collins attempted to add a provision defunding the rule to another bill. The maneuver was blocked briefly after another sleep-deprived trucker slammed into comedian Tracy Morgan’s limo van on the New Jersey Turnpike, severely injuring him and killing comedian James McNair. With truck safety in the spotlight again, the amendment was withdrawn, only to be slipped into another omnibus bill later.

When forced to defend its action on sleep rules, the trucking industry argued that it was counterproductive to keep truckers off the road at night, because more accidents happen during the day when highways are crowded. In fact, the rate of fatal accidents nearly doubles at night, even with fewer cars on the road.

Representatives of companies involved with trucking took a similarly deceptive approach to government regulation of sleep apnea among drivers. Sleep apnea is a condition that causes the airways to close repeatedly during sleep, interrupting breathing dozens of times per hour during the night and leaving the person exhausted and prone to falling asleep during the day. The risk of the condition rises dramatically with weight gain, and as many as two-thirds of truckers are obese. According to a Harvard study, truckers with sleep apnea are five times more likely to cause a crash. When the FMCSA sensibly moved to require overweight truckers to get tested for sleep apnea, the trucking industry worked to pass a bill requiring the agency to use a longer, more cumbersome rule-making process. While the move would in fact delay action on sleep apnea regulation, it was presented as a safety measure, and passed Congress easily.

In the face of increasing deaths from truck accidents, the trucking industry is lobbying for heavier trucks, younger drivers, and lax insurance requirements. Stronger truck safety regulations are needed to save lives, but the industry is pushing in the wrong direction.